In spring of 2018, the Province of British Columbia funded homeless counts in 12 B.C. communities. HSABC, Urban Matters and the BC Non-profit Housing Association coordinated these counts and combined the results with available data from 12 additional counts and shelters to prepare this report.

What is the Homeless Count?

The 2018 Report on Homeless Counts in B.C. provides important baseline information on the estimated number, key demographic and service provision needs of people experiencing homelessness in communities across B.C.

A Point in Time (PiT) count provides a snapshot of people who are experiencing homelessness in a 24-hour period. For the purpose of the 2018 homeless counts conducted in the 12 provincially funded B.C. communities, an individual was defined as experiencing homelessness if they do not have a place of their own where they pay rent and can expect to stay for at least 30 days.

Findings from the Homeless Count

A total of 7,655 individuals were identified as experiencing homelessness in the 2018 Report on Homeless Counts in B.C. This included 219 children who were under the age of 19 and accompanied by a parent or guardian. The majority were sheltered (63%) and 37% were unsheltered.

Among those who responded to the survey, 68% identified as male and 30% as female. Two percent (2%) of respondents self-identified a gender identity other than male or female. 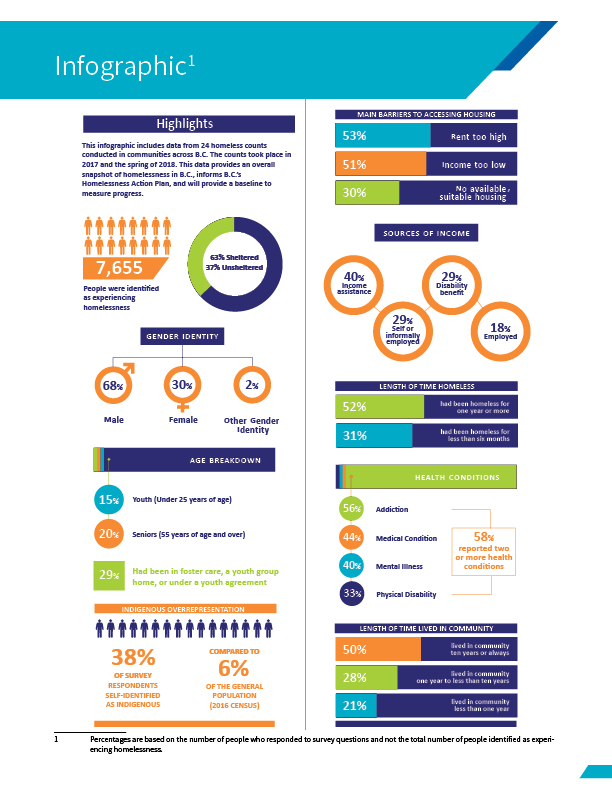 The three main barriers to accessing housing identified by survey respondents were high rents (53%), low incomes (51%), and a lack of available, suitable housing (30%).

Survey respondents were likely to be long term community residents – 31% of respondents had lived in the community where they were surveyed for ten or more years, and an additional 19% had lived there all their lives. 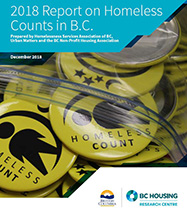 2018 Report on Homeless Counts in B.C